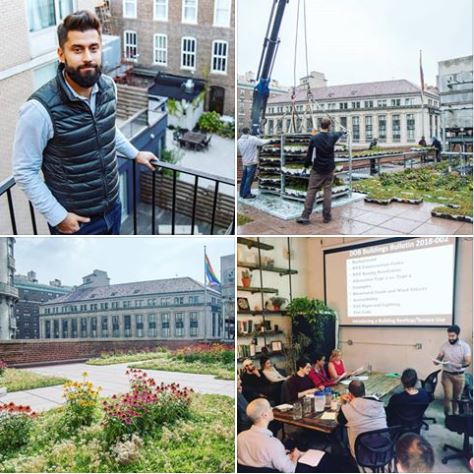 As a LEED-accredited professional engineer and buildings expert working with RAND Engineering & Architecture, DPC in New York, I have the ability to shape urban life in a way most people don’t.

I spend much of my energy maintaining and improving NYC’s epochal building stock – which spans in time across the industrial, social, and digital revolutions: from the historic mansions of the Upper East Side, to the quaint row houses of the Upper West, to the cast-iron showcase in SoHo, to the “lofty” heavy timber warehouses of TriBeCa and Williamsburg, all of those pre-war brick walk-ups, and finally the modern steel buildings and glass towers, reaching ever further skyward.

I consider it a privilege and a responsibility to keep these beautiful stores of human energy intact for future use.  And there is almost nothing more sustainable within my field of view than to preserve what we’ve already built and adapt it to the needs of the present with perhaps some additional fun features – such as on-premises, hyper-efficient, closed-loop food production; water and energy retention/reuse; urban farming-centric public school cooperatives; mixed-use neighborhoods with circular economies (farm-to-table-to-compost-to-farm).

So there I found myself at Project Farmhouse last year, on an unusually balmy evening, beneath the 20-foot barn-inspired ceilings of this new GrowNYC event space. Waves of ag-enthusiasts rolled in, many coming directly from day tours of the various urban agriculture operations across the five boroughs and with new friends in tow. I myself had just visited Sky Vegetables, an 8,000 square foot rooftop farm situated atop an affordable housing development in the Bronx, and Square Roots Urban Growers, an outfit that has retooled shipping containers into compact growing facilities in Brooklyn.

In the spirit of the evening, the spread was sourced exclusively from these urban agriculture producers. The crowd was an impressive leafy mix – even for Union Square South – with urban farm operators, traditional farmers, food-focused entrepreneurs, international agtech startups, design professionals, and general enthusiasts of green technology, all gathered to celebrate the importance of urban agriculture, to share ideas, and to inspire one another. Vendors and operators set up stations offering everything from DIY aquaponics kits to packets of wasabi arugula. The venue’s signature hydroponic growing beds provided a lush backdrop for the conversation, which was equally lush.

There were a number of speakers, with the keynote delivered to a packed house by Henry Gordon-Smith of urban agriculture consultancy Agritecture. I was ready to be inspired, to hear how this collective was going to be dealing with our predicament: the hunger, the waste, the food deserts, and more generally speaking our absurdly long and fragile supply lines, soil erosion, pesticide overuse, marine dead zones, and the extinction of critical species which ultimately threatens everything.

By the end of the keynote, I knew that I needed to be a part of what was clearly a larger movement – one that could operate outside of and above the political climate and thus able to unify young and old, left and right, vertical and horizontal. To see all the attendees, including scores of millennials, gathered in the middle of one of planet earth’s most urban places all so committed to farming… it seemed so crazy it just might work.

I sought out Henry in the crowd and within minutes was set up with partner Ricky Stephens of AgTech X to discuss the possibility of leading a workshop on building-specific urban agriculture interventions. That initial conversation eventually blossomed into my now-ongoing course, Building The Rooftop Farm, a guide to legally constructing rooftop agriculture installations in NYC. I joined the urban agriculture movement that very night last year and haven’t looked back.

Over the past year, my new and ever-expanding list of urban ag contacts have called on me to determine the feasibility of a number of new agriculture/energy installations, leading to multiple large and ongoing projects for my team at RAND. I’ve evaluated building exteriors, interiors, and sites for new green roofs, solar arrays, farms and gardens, greenhouses, and ag-tech related installations.

In addition to my recurring AgTech X seminar, I’ve delivered a talk on rooftop amenities incorporating green roofs and solar at the 2018 CNYC Housing Conference; paneled a design charrette for adaptive reuse and reclamation of a major piece of NYC agricultural infrastructure; and met with farmers, chefs, council members, developers, designers, entrepreneurs, students, and every day New Yorkers passionate about bringing agriculture closer to the human experience.

Through all my work lunches, dinner chats, train rides, farm tours, and late nights working this past year, I've discovered that the most important human technology is community. This is the soil matrix from which all ideas grow and draw sustenance, the potential to turn seed into forest. Having a dedicated group to foster broad visions – such as the reclamation of the mostly barren rooftop space in New York and beyond, or achieving lofty sustainability goals (like NYC’s 80×50) – actually feels doable. Challenges abound: economics, codes and zoning, legislation, load carrying capacities, and so on, but with a dedicated group to chart a course with, to tinker new solutions with, to agitate government officials with, to deliver impassioned testimony at NYC council hearings with, these fights become winnable.

Signup for our Newsletter

Subscribe to our newsletter more information, tips, and updates.