I'm the president of a six-story cooperative in SoHo, and we have a long-standing problem with water leaking into the vault area underneath the sidewalk in front of our building. Some of the beams within the vault appear corroded, and concrete has broken off in spots, although nothing looks in danger of imminent collapse. What's the recommended course of action in a case like this? We've repaired cracks in the sidewalk as needed, but that hasn't seemed to help stop the leaks. I'm told replacing the whole vault can be very expensive, so we're wondering what our options are. 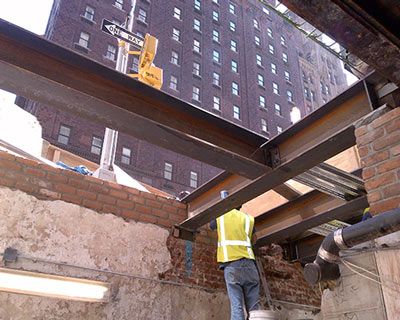 Completely replacing a sidewalk vault is expensive, but it's usually only a once-in-a-lifetime project.

Sidewalk vaults, the basement space extending underneath pedestrian walkways, typically last for decades, so the one on your cooperative's property is very likely the original one. While completely replacing a sidewalk vault is expensive, it's also usually only a once-in-a-lifetime project. But if that time has come during your board's lifetime, there's not much getting around it.

A common sidewalk vault structure consists of an approximately four-inch thick slab of sidewalk concrete on top of a waterproofing membrane, supported by a structural slab four to six inches thick. The entire sidewalk structure itself is supported by either a metal deck (common in recently built or replaced vaults) or (in most older buildings) by a series of steel cross beams and columns spanning between the structural members along the building line and a brick or concrete foundation wall that separates the vault space from the ground underneath the street.

A vault is generally as high as the adjacent basement and as wide as the sidewalk. Some vaults, however, may extend only part of the width of the sidewalk, while others can extend beyond the sidewalk and partly underneath the street. Vault space is commonly used for housing mechanical equipment, such as boilers, tanks, heaters, pipes, and the like. Many vaults are vented and may have access hatches with steps or mechanical hoists.

The most critical factor in vault maintenance, as with many building systems, is keeping water out. However, because vaults are underground, water tends to work its way down into them, making them an end point for leaks. Water wreaks havoc on the structural steel supports, their concrete encasement, and the brick retaining wall, not to mention the functioning of the mechanical equipment inside the vault. After several decades of slow but steady water infiltration, a vault's structural integrity will eventually be compromised, posing a danger to the equipment below and pedestrians above. (A sidewalk in sound condition should be able to withstand the load of a fire truck parked on top of it.)

Cracks and open joints in the sidewalk slab allow water to enter the vault below.

As your first step, it's recommended that the board hire an engineer to conduct a structural survey of the existing vault condition to determine the degree of deterioration and assess which parts can be repaired and which should be replaced. Above ground, cracks in the sidewalks, openings in the sidewalk joints, and poor drainage will allow water to enter the vault below. In the vault itself, cracked or broken-off concrete, rusted or deflected steel beams, a shifted retaining wall, or a wall with loose or spalling bricks are all indications of deterioration caused by chronic water penetration.

In some cases, limited repairs may suffice for the short term. Heavily deflected beams can be shored, for example, and defective concrete can be patched as temporary measures. Ultimately, however, the damage inflicted by years of exposure to the elements, especially with older vaults, will likely require a full replacement.

A full vault replacement entails demolishing the sidewalk slab and the underlying structural slab, removing steel beams or the metal deck, and possibly replacing sections of the retaining wall. Part of the street may need to be excavated as well. To replace the curb, a narrow trench is dug in the roadway. Curbs are often installed with a steel-plate face to protect the concrete from vehicles parked on or driven over them.

The new sidewalk slab should slope away from the building for proper drainage.

During demolition, a protective cover should be erected over the mechanical equipment in the vault to prevent equipment damage, and a plastic tarp should be placed over the shed surrounding the sidewalk to keep water from entering the vault during construction. In addition, a temporary wooden walkway and bridge must be set up to provide pedestrians safe access around the vault and into the building.

The new sidewalk slab should be installed to slope slightly away from the building and toward the street for proper drainage. Typically, the new sidewalk will be constructed with expansion joints along the building, curb, and every 25 feet, and with control joints around five-foot-square concrete sections, called flags. The joints prevent the concrete from cracking when the concrete first cures, and later during freeze-thaw weather cycles.

As a rule of thumb, replacing a sidewalk vault costs anywhere from $200 to $250 a square foot. So, for example, a relatively small vault measuring 10 feet wide by 50 feet long (500 square feet) would cost about $100,000 to $125,000 to replace, not counting engineering consulting fees. Building owners with limited budgets sometimes inquire about splitting very large vault projects in two phases, replacing half of the vault at one time and half at a later date. This can pose difficulties, however, and is not recommended. For one, the new membrane between the top slab and supporting slab or deck would have to adhere to an old (or non-existing) deteriorated membrane, making it hard to create a seamless waterproofing system. In addition, new steel beams and columns would be bolted to corroded, out-of-plumb existing steel, compromising the vault's structural integrity.

Keep in mind that all sidewalk fixtures, such as mailboxes, street signs, grates, parking meters, trash cans, etc., must be re-installed in the same locations they were in before the sidewalk was replaced. Also, permits are required from New York City Department of Buildings and the Department of Transportation (as well as from the Landmarks Preservation Commission if the building is in a designated New York City Historic District). One other note: some vaults enclose a smaller vault housing equipment from Con Edison or another utility. In such cases, building owners must obtain permission from the utility company before doing work on the surrounding vault.

Once the new sidewalk vault is in place, keeping it properly maintained is the best defense in keeping water out and preserving its longevity. Sidewalk cracks should be repaired soon after they appear and joints regularly caulked. (De-icers containing sodium chloride are corrosive and should be avoided.) Steel beams should be checked for signs of rust and deflection and for cracked and broken-off concrete encasement. Look for signs of leaks during and after rainstorms; any points of water entry must be identified and repaired promptly. A dehumidifier can help fight the dampness common in even the most watertight vaults.

Replacing a sidewalk vault is a major project, but if done properly, your cooperative shouldn't have to worry about having to replace it again for a long time.

Stephen Varone, AIA is president and Peter Varsalona, PE is principal of RAND Engineering & Architecture, DPC. This column was originally published in the October 2004 issue of Habitat Magazine.